The Government of Japan allocates US$6.2 million for improving maternal and child health, and drug control in the Kyrgyz Republic

"Japan has kept close relationship with Kyrgyzstan since its independence, and our country has always supported the establishment of true democracy for Kyrgyz government and its citizens.  Valuing the result of the previous projects of UNICEF and UNODC, we hope that these projects boost the improvement of social economic situation of the Kyrgyz Republic,” told Ambassador Extraordinary and Plenipotentiary of Japan to the Kyrgyz Republic Mr. Yoshihiro Yamamura. 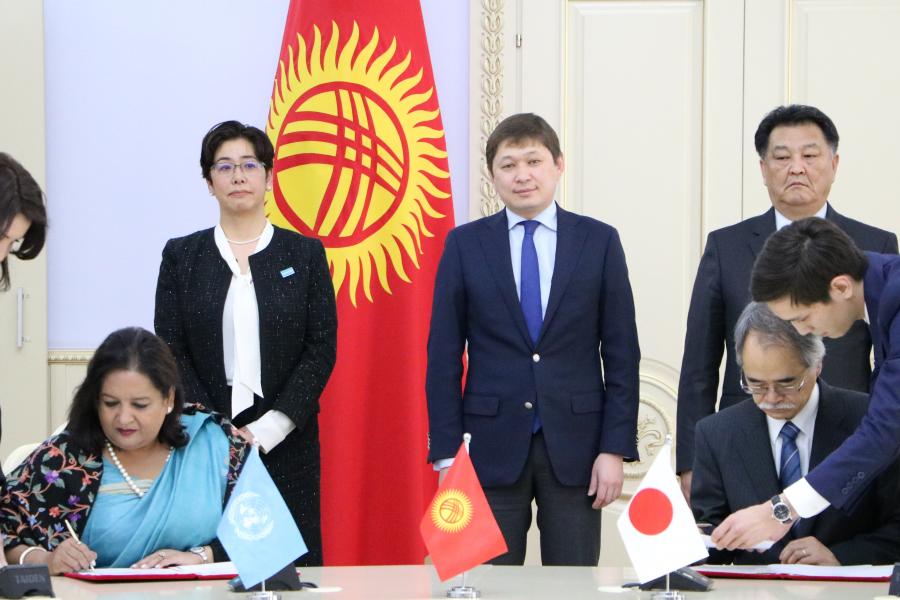 The project for Strengthening Maternal and Child Health Care Systems will reach over 924,000 children aged 0-5 in the Kyrgyz Republic. Also, it will ensure the coverage of over 150,000 pregnancies in the country through improved capacity of healthcare workers at the primary level. With the Government of Japan contribution of US$3.5 million to this programme, UNICEF and the Ministry of Health will re-construct and rehabilitate water infrastructure, hot water, heating and sewage system in 18 hospitals as well as procure live-saving equipment and supplies. The project also envisages strengthening involvement and participation of communities, community-based groups and families in identifying priority health needs and support women and caregivers in the improvement of child care practices and care seeking behaviors.

“The partnership between the Government of Japan and UNICEF will expand our health programme to save more lives of girls and boys. We are grateful to the Government of Japan for the continued commitment to reach every child in the Kyrgyz Republic,” said UNICEF Representative Yukie Mokuo. “Supporting the efforts of the Ministry of Health, this programme aims at further reduction of child mortality and increased universal health coverage,” she added.

The contribution from the Government of Japan for the initiative on Drug Control is very timely, as Kyrgyzstan is located in close proximity to Afghanistan, where in 2017 the cultivation of opium poppy increased by 63 per cent to an all-time high. The risks of trafficking may increase including through the northern route and given that the country has recently undergone a law enforcement reform process, United Nations Ooffice on Drugs and Crime (UNODC) is committed to support the new structures that relate to counter narcotics. Through the US$2.7 million contribution by the Government of Japan, UNODC will provide technical support for drug control efforts in the country within the framework of the UNODC Programme for Central Asia 2015-2019. These efforts will be aimed at supporting strong national legislation on drug control, national operational capacities on drug law enforcement, as well as for enhancing the capacities of other competent authorities in maintaining the legal turnover of controlled narcotic drugs, psychotropic substances and precursors under the ratified UN conventions. As part of a balanced and comprehensive integrated strategy, the health consequences of drug use especially for the young and vulnerable population will also be addressed.

Thanking the people of Japan, Ms. Ashita Mittal, UNODC Regional Representative for Central Asia, noted: “It is critical to build the country’s counter narcotics efforts, including operational responses for enhancing interdictions, to counter the many challenges it may face as a result of the dynamic drug markets that can have a direct impact on the overall safety, security, governance and health of the citizens of the country. These efforts contribute to the overall Sustainable Development Goals and the 2030 agenda.”

UNODC assists the Government of the Kyrgyz Republic and citizens in reducing the threats caused by illicit drug trafficking, transnational organized crime and terrorism. We work with our partners in various fields, including combating organized crime, trafficking in human beings and corruption, as well as promoting reform of the criminal justice system and preventing non-medical drug use. For more information about UNODC and its work, please visit www.unodc.org and follow up on Facebook

UNICEF promotes the rights and wellbeing of every child, in everything we do. Together with our partners, we work in over 190 countries and territories to translate that commitment into practical action, focusing special effort on reaching the most vulnerable and excluded children, to the benefit of all children, everywhere. For more information about UNICEF and its work, please visit: www.unicef.org/kyrgyzstan. Follow us on  Facebook and Twitter.