"By identifying and eliminating the causes of crime we can create a safe living environment for all. We can make this happen if government, civil society and engaged citizens work together”, Isakov stated.

The Prime Minister stressed that crime prevention is a core priority for the police. “Progress in this area requires mutual understanding and the active involvement of the community in which the police are embedded”, he noted.

According to Koen Marquering, International Coordinator at the United Nations Office on Drugs and Crime, the biennial forum promotes dialogue between the Government and civil society on pertinent crime and safety issues, such as road safety, juvenile delinquency and the prevention of violent extremism. As noted by Marquering, the forum provided an opportunity to showcase successful crime prevention initiatives and discuss how social partnerships to promote public safety can be institutionalized. 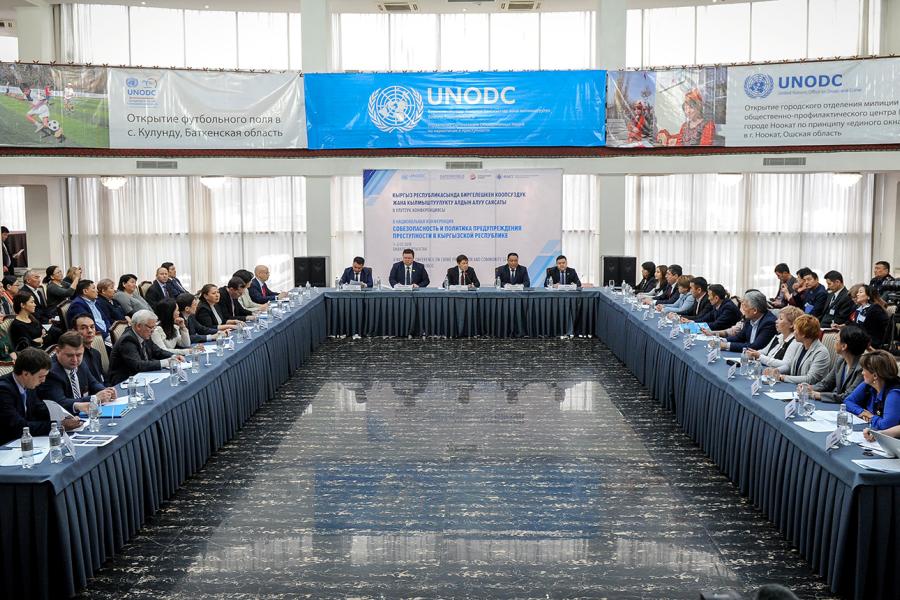 During the past two years UNODC supported training and exchange of experiences on crime prevention for over 280 local government officials, police and other stakeholders in the country. This led to the development of a training manual, which will be incorporated in the curriculum of the Academy of Management under the President of the Kyrgyz Republic.

These and other initiatives were discussed at the forum with participants recommending legislative amendments and mainstreaming of crime prevention in relevant policies, such as the 2017-2020 Youth Policy. Suggested measures to reduce the death toll on Kyrgyz roads ranged from infrastructural improvements to tighter regulation of private companies offering public transportation services and awareness raising campaigns on safety enhancing measures citizens themselves can take, such as the need to wear reflective clothing during night time. Participants also stressed the importance of social reintegration of offenders, including the development of a program for the rehabilitation of violent extremist offenders.

In response, Prime Minister Isakov committed to establishing a working group to work on the legal framework governing crime prevention. The Prime-Minister also emphasized the need to transform the police from a militarized structure into a service-oriented institution that works closely with the population.

Following its launch in 2016, the crime prevention forum was convened for the second time based on a joint initiative by the United Nations Office on Drugs and Crime, Saferworld, the Civic Union "For Reform and Results" and the Foundation for Tolerance International with financial support provided by the US State Department’s Bureau for International Narcotics and Law Enforcement Affairs (INL).