Kyrgyz CNS-hosted event gathered some 20 delegates from both countries. The meeting is the follow up event of the agreement achieved during the first inter-agency coordination working group meeting between Interior Ministries of the Kyrgyz Republic and the Republic of Uzbekistan as a part of the signed protocol on cooperation for 2018-2019 years, that took place earlier on 02 March 2018 this year in Tashkent city.

During the event the delegations of the Kyrgyz CNS and the Uzbek CND have discussed priority areas of cooperation between agencies, trends and developments on the drug situation in the region, the effectiveness of national efforts on drug control as well as drug prevention issues.

In addition, the Heads of regional operational units of the Kyrgyz CNS and the Uzbek CND had an opportunity to discuss specific topics including cross-border cooperation on countering illicit drug trafficking along Kyrgyzstan-Uzbekistan border in a separate meeting.

“As you know, Afghan drug trafficking on the so-called "northern route" passes through the territories of our countries and further to the world’s markets. In this context, interagency cooperation on countering illicit drug trafficking is extremely important. We support initiatives to consolidate efforts aimed at addressing new challenges and threats to security and stability in the region", said Mr.Ilias Bakirov, Head of the Counter Narcotics Service (CNS) of the Interior Ministry of the Kyrgyz Republic. 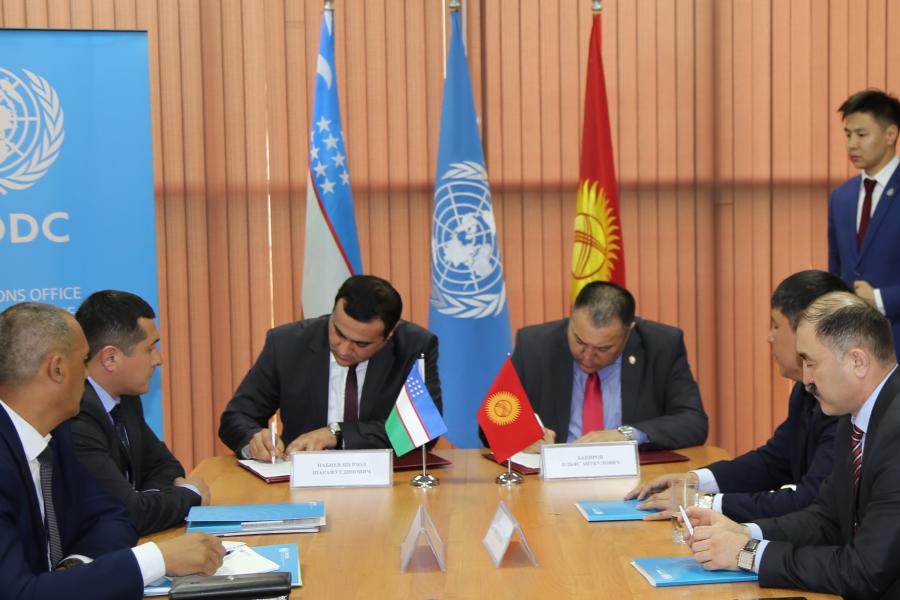 During the meeting, Mr. Ilias Bakirov proposed implementation of "Ferghana Initiative", which envisages a platform of anti-drug cooperation between countries that have access to the Fergana Valley.

"Taking into account the fact that drug trafficking routes mainly passing through the Fergana Valley, drug control agencies need to exchange information promptly and intensively, and to have agreed inter-agency cooperation plans," he noted.

According to Mr. Shezod Nabiev, Head of the Counter Narcotics Directorate (CND) under Criminal Investigation Department of the Interior Ministry of the Republic of Uzbekistan: “We are fighting against the same problems the growing narco-expansion, the rapid spread of new psychoactive substances and the involvement of young people in drug trafficking. I hope we will establish an effective interagency cooperation at the level our regional units along the bordering provinces. The Uzbekistan remains ready for fruitful cooperation and dialogue”.

“UNODC will continue facilitating the cooperation dialogue between the states in the region including its support to the Governments on strengthening legal framework on drug control issues”, said Mr. Yusuf Kurbonov, the INTL Programme Coordinator of the UNODC Programme office in the Kyrgyz Republic. "According to the latest opium survey, the opium harvest in Afghanistan in 2017 reached up to 9,000 tons, which is an absolute record the past decade, so this meeting of the competent counter narcotics authorities of Kyrgyzstan and Uzbekistan at the “Osh knot” of the “Northern Route” of opiate’s trafficking is extremely urgent”, he added.

Important to note that with support from UNODC in November 2017, the Ministry of Interior (MoI) of the Kyrgyz Republic and the Drug Control Agency (DCA) under the President of the Republic of Tajikistan conducted a two-day working meeting aimed at strengthening interagency cooperation in the field of countering transnational organized crime and illicit drug trafficking. The parties signed the bilateral cooperation protocol on combating illicit drug trafficking, psychotropic substances and their precursors.

The meeting was supported by the UNODC Programme Office of in the Kyrgyz Republic as a part of the Sub-programme-1 of the UNODC Programme for Central Asia 2015-2019 under initiatives aimed at "Countering transnational organised crime, illicit drug trafficking and preventing terrorism" with funding provided by the government of the Russian Federation.