The Vice-Prime Minister also added that within the framework of the UNODC Program for Central Asian states for 2015-2019, the Kyrgyz Republic is actively cooperating in such areas as combating transnational crime, illicit drug trafficking and terrorism; criminal justice, crime prevention and corruption; drug prevention, drug dependence prevention and treatment, drug reintegration and HIV prevention, supported through research and trend analysis. "These essential for the Kyrgyz Republic issues might predeterimine the efficency of the undertaken measures."

Speaking at the high-level event, which gathered some 90 government representatives from Kazakhstan, Kyrgyzstan, Tajikistan, Turkmenistan and Uzbekistan, Ms. Ashita Mittal, Regional Representative for Central Asia at the United Nations Office on Drugs and Crime (UNODC), called for a balanced approach to drugs, crime and terrorism, which enables development, protects human rights and ensures access to treatment and support.

“42% of the over 70 million people living in the 5 Central Asian countries are under the age of 24”, she said. “UNODC’s support in the region is geared towards the education of young people so that they develop a stake and commit to making their communities economically vibrant, healthy and safe, ensuring that they are free from risks related to drugs, transnational organized crime and terrorism.” 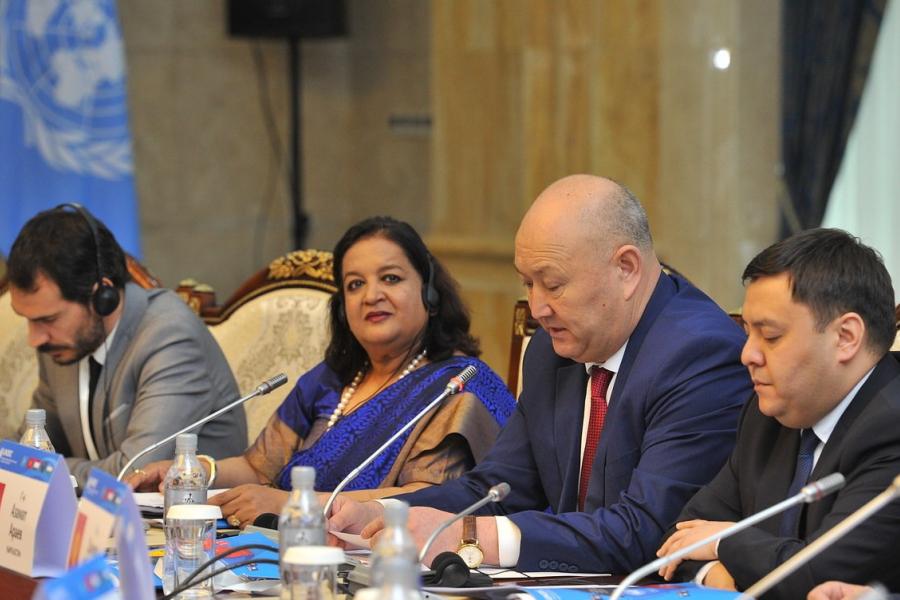 The meeting began with a video message from UNODC Executive Director Yuri Fedotov, who noted that increased cultivation and production of opium in Afghanistan poses serious challenges globally and especially to the Central Asia region.

“I appreciate the efforts of Central Asian states to foster regional cooperation for addressing security and sustainable development to deal with possible risks of terrorism, drug trafficking and transnational organized crimes including the illicit financial flows. The 19 January Security Council meeting under the chairmanship of Kazakhstan, the Samarkand Conference on security and development organized by Uzbekistan in partnership with UNODC and UNRCCA and the recently concluded conference on Afghanistan in Tashkent all reflect political will of Central Asian states to maintain peace and security and promote inclusive socio-economic development processes as a shared responsibility in the region”, Mr. Fedotov stated.

The UNODC Executive Director noted: “Our work aims to support implementation of the operational recommendations contained in the outcome document of the 2016 UN General Assembly Special Session on the world drug problem and help countries achieve the nationalized Sustainable Development Goals and the Agenda 2030 so no one is left behind.”

UNODC bolstered law enforcement cooperation to counter illicit drugs trafficking and enhance border security through the establishment of border liaison offices, outposts and port control units and the functioning of an information and coordination platform at the Central Asian Regional Information and Coordination Centre for Combating Illicit Trafficking of Narcotic Drugs, Psychotropic Substances and their Precursors (CARICC).

The Programme for Central Asia is UNODC’s framework for cooperation in Kazakhstan, Kyrgyzstan, Tajikistan, Turkmenistan and Uzbekistan. In 2017, UNODC delivered over 14 million USD in technical assistance in the region within the framework of this Programme.