Management of violent extremist prisoners in Kyrgyzstan: The Case of Prison 27

The prison houses approximately 700 prisoners, including more than 80 who have been convicted for crimes related to violent extremism. The latter are accommodated in a dedicated wing of the prison separate from the other prisoners.

On 1 August, the United Nations Office on Drugs and Crime (UNODC) officially handed over a newly constructed laundry facility in prison 27 equipped with 3 large-capacity washing machines. The new facility was created with funding from the Government of Japan.

“Since 2016, we have invested in the creation of this prison wing for violent extremist prisoners”, said Mr. Zhorobek Duishenbiev, the Deputy Chair of the State Prison Service of the Kyrgyz Republic. “Thanks to the financial support provided by the Government of Japan, we have been able to improve the conditions of detention in this prison considerably. The interventions we are piloting in partnership with UNODC allow us to work more effectively with prisoners to promote their social reintegration and prevent recruitment into the ranks of violent extremist groups”.

During the handover ceremony, the Ambassador of Japan to the Kyrgyz Republic, H.E. Mr. Yoshihiro Yamamura, presented a group of 8 prisoners with certificates to mark their successful completion of a practical training course giving them knowledge and skills to manufacture leather and felt products. In total, 35 violent extremist prisoners have already successfully passed such training and are engaged in the production of souvenirs and art work made from leather and felt. They also paint and draw.

“It is encouraging to see how various disengagement interventions are piloted in this prison”, noted H.E. Mr. Yoshihiro Yamamura. “Vocational training is a core element of prisoner rehabilitation and the Government of Japan fully supports the efforts of the State Prison Service of the Kyrgyz Republic to establish and implement such programs”.

In addition to the improvement of sanitary conditions and the implementation of vocational training and income generation programs, the Japanese-funded project paid particular attention to measures enhancing prison security. Cell blocks holding violent extremist prisoners were equipped with an innovative video surveillance and intercom system. This system not only allows for better monitoring of prisoners by prison staff, but also enables prisoners to easily contact and ask for support from prison staff directly from their cells. 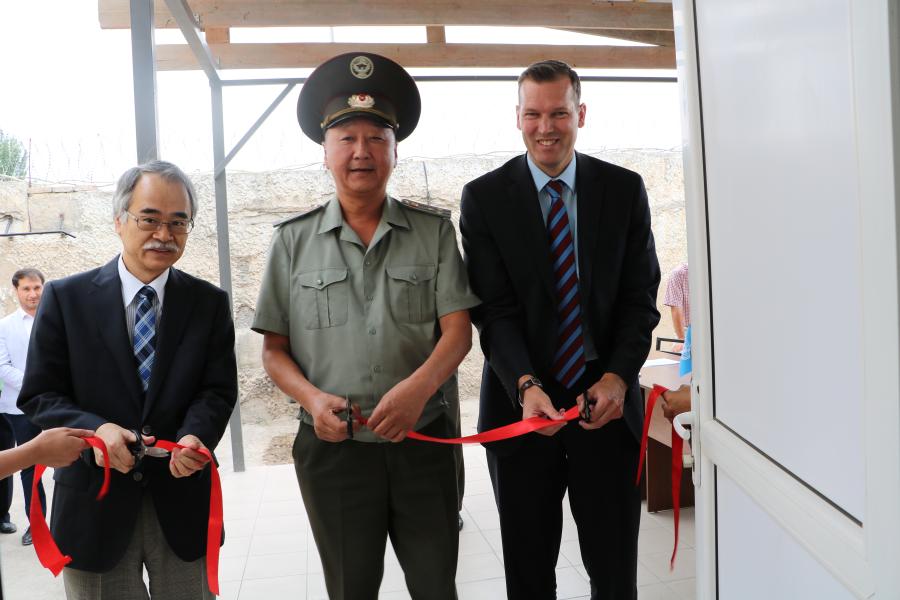 “Prison administrations need to decide for themselves how to house violent extremist prisoners within their prison system. Separating violent extremist prisoners from the general prison population offers some advantages, but also poses new challenges and risks”, said Mr. Koen Marquering, Acting Head of the UNODC Program Office in the Kyrgyz Republic. “To increase the chance of success in working with this category of prisoners, UNODC promotes a comprehensive approach, which simultaneously addresses a range of issues, such as prison conditions, security management, prison staff capacity, risk assessment and classification, and social reintegration through psychological counselling, social work interventions; faith-based dialogue; vocational training, sport and recreation and support to prisoners to maintain their family ties”.

In line with this approach, UNODC procured sports equipment for the prisoners who now have the possibility to play table tennis during their daily time out of their cells. The prison wing for violent extremist prisoners also houses a new library where prisoners can loan books to read in their cells.

Office space for psychologists and social workers has been improved. A computer with internet connection enables prisoners to talk to their loved ones using a webcam and software for video calls.

“Another innovative aspect of our joint work with the Prison Service involves the introduction of new software for electronic registration of visits, packages and parcels”, Marquering noted. “The idea behind this initiative is to move from an outdated paper-based to a more efficient electronic format for the registration of documents and other items with the support of a new computer, printer and passport scanner. This is expected to improve the level of control of what enters the prison and reduce waiting times for family and other visitors who come to see their loved ones or bring food and other essential items to the prisoners”.

Prison 27 was the first prison where UNODC supported the Kyrgyz Prison Service to strengthen the management of violent extremist prisoners and prevent radicalization to violence. UNODC continues to assist the authorities to implement similar programs in several other pilot prisons within the framework of the UNODC Programme for Central Asia.