The Iron Horse: Improving animal and human health in Kyrgyzstan

Dr Usupbaeva is the recipient of one of nearly 630 motorcycles provided to veterinarians of Kyrgyzstan by IFAD.

Dr Maksat Usupbaeva zooms up the steep, winding roads of Kyrgyzstan’s Barskoon district on her motorcycle. She is one of a rising generation of veterinarians confidently riding “iron horses”, as they like to call them, to isolated rural communities.

In Kyrgyzstan, a country where over half of all land area is pastureland, herding cows and other livestock is central to the national economy, society and culture. But the nation has long lacked enough trained veterinarians to care for all these animals, and crossing Kyrgyzstan’s mountainous, sparsely populated landscapes to reach the herding communities who need their services remains a challenge.

As a result, one of the biggest challenges herders face relates to the health of their animals. Serious illnesses are common in their herds, such as brucellosis, a bacterial infection that humans can also contract. This, combined with the other challenges common to the sector – degraded pasturelands, disputes over land rights – has kept the productivity of Kyrgyzstan’s livestock sector low and its value chains underdeveloped. Many herders (and their animals) thus find themselves facing constant poverty and repeated threats to their health.

Since 2012, however, IFAD has invested over US$70 million through the LMDP project, implemented by Kyrgyzstan’s Ministry of Agriculture, and its successor LMDP-II. Together, these projects are helping 2.6 million of the nation’s rural-dwellers build a stronger pastoral economy. 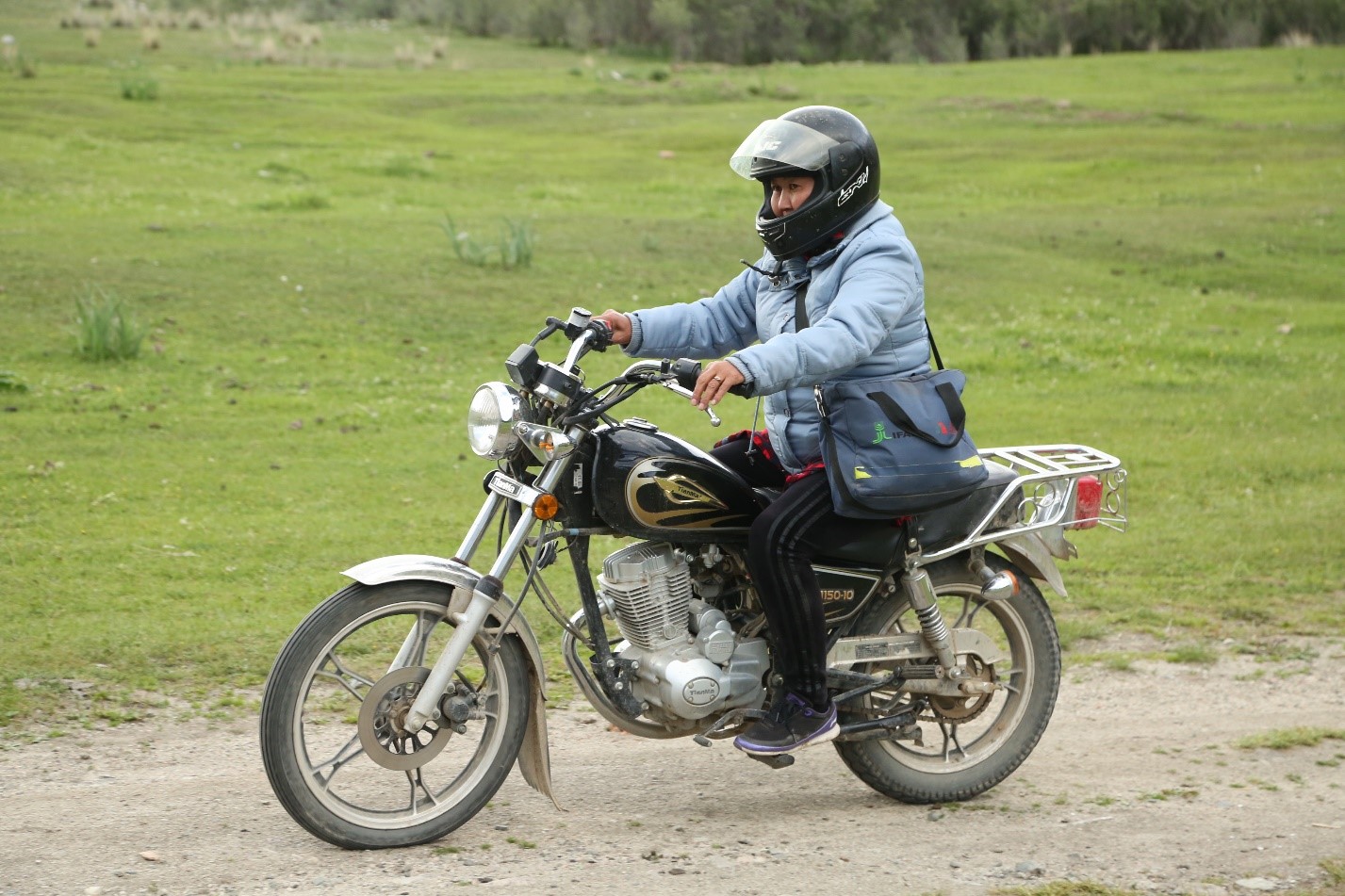 Dr Usupbaeva departs to visit a farmer after receiving a call.

Investing in health and wealth

An important part of this support has been investing in the capacity of private veterinarians and engaging them in the provision of veterinary services, in partnership with the public sector. In 2018, the Government of Kyrgyzstan embedded privatized veterinary services into a revised legal framework. This model is now being implemented systematically across the country, with the support of IFAD.

The motorcycle initiative is a key part of this model. Dr Usupbaeva is the recipient of one of nearly 630 motorcycles provided to veterinarians by IFAD. Light, fast and easily manoeuvrable on narrow, winding roads, motorcycles are proving to be a cost-effective way to traverse Kyrgyzstan’s mountain passages.

The model also promotes the training of new veterinarians. To date, over 100 students have been awarded scholarships to study veterinary science at the Kyrgyzstan National Agrarian University under the LMPD and LMPD-II. As a result of the cooperation between IFAD and the Kyrgyz Government, the number of veterinarians has almost doubled, from 1,500 in 2013 to 2,600 in 2018.

For these young graduates, being a veterinarian is more than just a job. It’s a chance to start a professional career in their home villages, and to contribute to the development of their communities and the well-being of their inhabitants.

Such is the case for Dr Anarbek uulu Musabek, a 23-year-old resident of Birlesken village. His father died early in Dr uulu Musabek’s childhood, leaving his mother to care for him and his five siblings. But thanks to the scholarship he received through LMPD-II, he now has a way to build a livelihood in his home region and support his family. 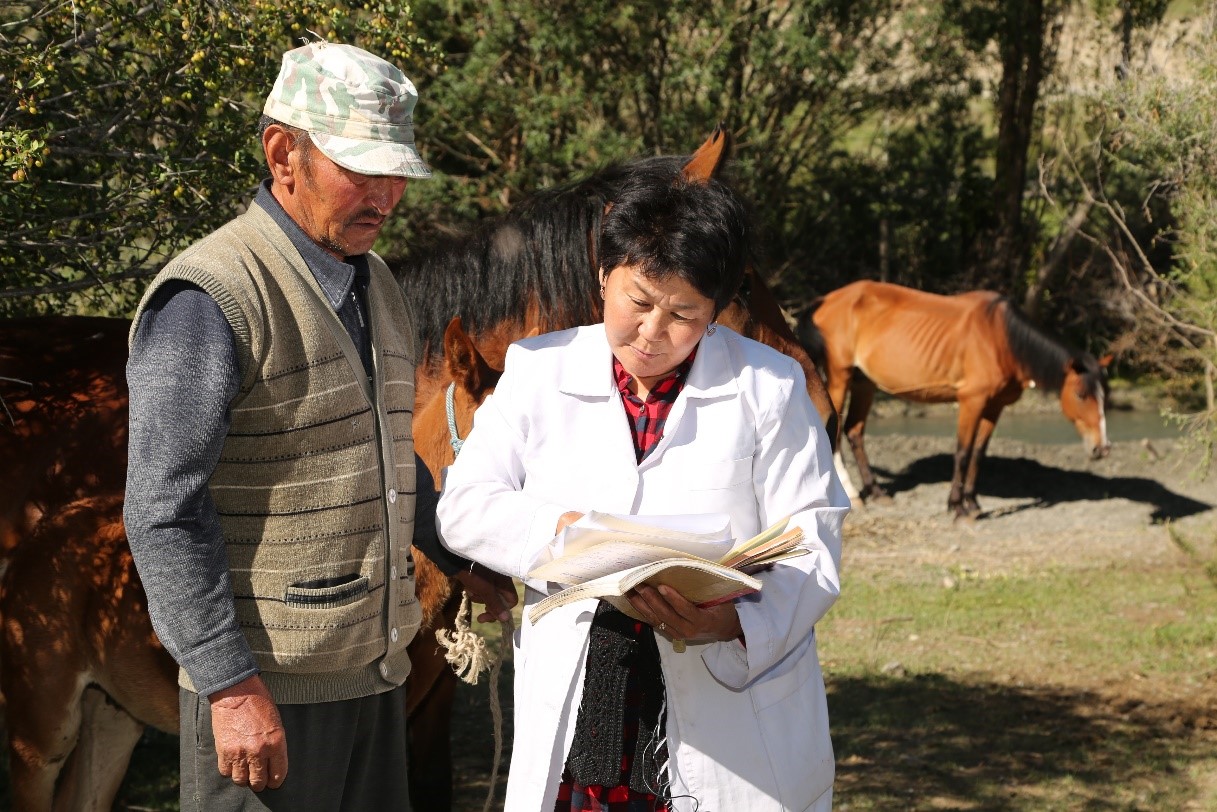 Dr Usupbaeva consults with a farmer.

Traveling veterinarians are already making a difference. Most recently, they’ve been helping the government conduct a vaccination programme to control echinococcosis, a parasitic disease that mainly affects sheep and dogs but can also infect humans. These efforts build on a previous IFAD-funded project in which veterinarians were deployed to control brucellosis through training and vaccination drives.

According to the Kyrgyz Ministry of Health, these IFAD-supported campaigns are already bearing fruit. The number of cases of brucellosis in humans has dropped – from 4,412 cases per year in 2011 to less than 500 in 2020 – and the incidence of echinococcosis in humans is decreasing, too.

And with improved access to veterinary care, animals are healthier – and more productive. Sales of products like milk and meat are up, and herders are benefiting from increased incomes. One study, for example, found that small herding households are now eating more meals a day, have better sanitation and drinking water, own more assets such as vehicles and household appliances, and make greater use of agricultural equipment. Visible improvements have also taken place in roads and other infrastructure, permitting access to more distant pastures.

These and other IFAD-funded initiatives in Kyrgyzstan have revolutionized the way these families – and everyone who supports them, including their veterinarians – carry out their work. As Dr Usupbaeva says, “Our work has become easier thanks to the support received from IFAD.”