Please let me express my respect to the Jogorku Kenesh of the Kyrgyz Republic and thank the Parliamentary Committee on Social Issues, Education, Science, Culture, and Health for letting me convey the position of the United Nations on the draft law on introduction of amendments and additions to a number of normative-legal acts related to the regulation of activities of non-profit organizations.

Before I begin, I would like to note the positive steps in the area of human rights achieved by the Kyrgyz Republic recently, including appearing before the Universal Periodic Review mechanism, ratification of the UN Convention on the Rights of Persons with Disabilities, official visits of UN Special Procedures, including the UN Working Group on Enforced Disappearances, and the UN Special Rapporteur on the rights of minorities, and the adoption of the Action Plan on Human Rights for 2019-2021.

In his Independence Speech on 31 August on Ala Too square, President Sooronbai Sharipovich stated that Kyrgyzstan faces the need to deal not only with national issues, but also confront global challenges. He said the country’s objective is to live in a modern society and a prosperous state powered by human potential and freedom. He called for building a country, where everyone could live comfortably and where freedom is a source of development.

During his last visits to the EU and the UN General Assembly, the President stated it is not easy to build a genuine democracy, but noted that it is the only path the people of Kyrgyzstan has chosen and that Kyrgyzstan would continuously reinforce democratic principles in developing the country, with the state governance focusing on the needs of every person, provision of rights, freedoms, and equality in the society.

I also would like to note the unusual time we are all meeting today. The Government of the Kyrgyz Republic is putting considerable efforts to contain COVID-19. This pandemic poses an unprecedented challenge to the whole world. According to the IMF, we are going to see a significant recession, undermining economies and livelihoods of people, hitting hardest the most vulnerable groups. It is the time for critical and swift actions, together with civil society groups, to address the urgent health and socio-economic needs of the population.

In Kyrgyzstan, the UN and the partners are fully mobilized to support the Government in its efforts to suppress the transmission of COVID-19 as quickly as possible and minimize its social and economic impact. We are implementing our sectoral response plans in close collaboration with the Government, respective Ministries and civil society institutions, enabling us to lead a coordinated, targeted humanitarian response to help the government mobilize additional resources and effectively cope with the pandemic, and do so with the minimum negative impact on people, their wellbeing, and their rights and dignity.

UN Secretary General Antonio Guterres has called for global solidarity in the face of the unparalleled challenges. Societies must come together as never before to mobilize themselves and focus their efforts to suppressing the virus and its consequences. As the State of Emergency restrictions have been lifted in Kyrgyzstan, the whole-of-society mobilization is becoming even more important. We must remember that it is a long-distance travel we are embarking upon, and the role of civil society in this situation is critical.

NGOs often serve as a bridge between the government and people most in need. With their network of active, dedicated, and passioned community leaders, they help the Government to deliver much needed services to vulnerable people, including those with disabilities, HIV, victims of gender-based violence, marginalized youth on the verge of radicalization, to reintegrate these groups and build an inclusive and a thriving society.

Today, the Jogorku Kenesh committee is considering draft law No. 6-2328/20 on amendments to certain legislative acts (the Non-Profit Organizations Act and the State Registration of Legal Entities, Branches and Representative Offices Act), which was adopted at first reading on 4 March 2020.

The proposal has elicited significant concerns from civil society representatives, members of the public, some Members of Parliament and from the international community including several United Nations Special Procedures Mandate Holders.

Given the importance of the issues raised in the proposed legislation, including in relation to human rights standards, I would like to invite your attention to the expert opinion of the UN Special Rapporteurs and a member of the Venice Commission.

Similarly, in accordance with the Venice Commission and the OSCE Office for Democratic Institutions and Human Rights (OSCE/ODIHR) Joint Guidelines on Freedom of Association, States must not interfere with the rights and freedoms of associations and individuals exercising their right to freedom of association and must promote this freedom by creating an enabling environment in which associations can operate. Any restrictions on the rights to freedom of association and the rights of association, including sanctions must be proportionate to the legitimate aim envisaged and there must be a strong, objective justification for the law and its application. We note with regret, that the proposed amendment to the law does not meet this threshold.

The United Nations remains concerned that the Jogorku Kenesh is proceeding with efforts to amend the legislation on NCOs into law without full consultation with and participation of civil society.

As I highlighted earlier, with the significant impact of COVID-19 on the economy and society, we believe this is the time for national mobilization to confront this pandemic and to strengthen relationships between the government and civil society. Sadly, the proposed legislation detracts from these national objectives.

I would like to emphasize that the Kyrgyz Republic has for many years derived pride from its international recognition as a democracy where freedom of assembly, of association and the right to free speech thrives. The United Nations is therefore concerned that the efforts towards this amendment to the legislation will undermine this reputation and detract from the overarching goals of national development contained in the National Development Strategy, and several other instruments of state policy such as Kyrgyz Zharany. 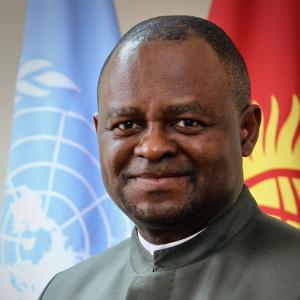