This conference is being held with the support of the United Nations.

Congratulations to all of you on these three occasions.

We are here to demonstrate once again that we respect and protect human rights.

That we look today at both the Constitution and the Parliament through the same lens - protection of human rights - provides us with an opportunity have a productive conference.

Dear participants of the conference!

The Universal Declaration of Human Rights is one of the most significant and widely-known documents. Adopted after the two World Wars, this international document calls for the preservation of human values and has been translated into all languages of the world. It is a concept document consisting of only 30 articles. It is a historic declaration adopted only three years after the United Nations was established.

The Declaration served as the basis for documents, recognized by all humankind, including the international covenants on civil, political, economic, and social rights.

The ideas enshrined in the Universal Declaration of Human Rights correspond to the mentality and worldview of the Kyrgyz society. The proclaimed ideas of equality of women and men, calls for respect for human rights and fundamental freedoms regardless of nationality, language, religion, strengthening friendliness and mutual understanding between people echo the values our ancestors held dearly.

For us respecting the dignity of each individual, protecting the rights of children and women is tantamount to preserving the centuries-old historical heritage and spiritual values of our nation.

That is exactly why we, the people of Kyrgyzstan, were the first in the Central Asian region in 1994 to sign the Universal Declaration of Human Rights.

Since then a quarter of the century has passed. Protection of human rights was and remains to be the primary responsibility of our state.

Recently, we have seen that organizations in different parts of the world intensified their activities which violate human rights.

We always oppose those, who under the guise of various political and religious slogans, take a person’s life, harm the health of people and maim them.

We strongly condemn the violence and support the joint actions of the world community against extremism and terrorism.

The Kyrgyz society also strives to respect values that are not mentioned in the Declaration, but are so necessary for the modern world.

I want to emphasize that our ancestors treated with great respect not only people, but also nature and animals. The worldview and human traditions and customs of our people are very well reflected in the remarkable works of our great classic writer Chyngyz Aitmatov

The Universal Declaration of Human Rights attaches great importance to the fairness of courts and the transparency of judicial processes. In addition, it stresses the need to put an end to impunity for law enforcement bodies.

Kyrgyzstan has recently taken decisive actions in this regard. In 2019, we will begin to live in the framework of the new legal norms. Pre-trial investigative actions, judicial proceedings, execution of court decisions will be delivered in accordance with the norms of the new codes and laws.

Today we are also celebrating the 80th anniversary of Zhogorku Kenesh. It made a significant contribution to the implementation of the above-mentioned reforms, improvement of the wellbeing of society, and the protection of the rights of every citizen.

Recognizing the crucial importance of legislative provision for ensuring respect for human rights, I want to express my gratitude to the entire parliament.

MPs played a historical role in terms of implementing the Constitutional reforms, clarifying the norms of the Constitution and directing them towards improvement of people's lives.

Dear Dastanbek Artisbekovich, I congratulate all the members of Jogorku Kenesh, led by you, MPs from the previous convocations, and the staff of Jogorku Kenesh on the 80th anniversary of the Parliament! I wish you all good health, well-being and great success in your work.

We will soon have an event dedicated to the anniversary of the Parliament.

I take this opportunity to congratulate the people on the 25th anniversary of the Constitution.

Despite that it has undergone a number of changes, our Constitution ensures the stability of public life, the permanence of state foundations and the balance between the branches of power.

I am confident that serious thoughts and remarkable ideas aimed at ensuring human rights will be expressed today.

I believe your suggestions and opinions will help further improve the efforts to protect human rights in our country.

I express my deep gratitude to our partners from international organizations for their support in organizing today's conference. 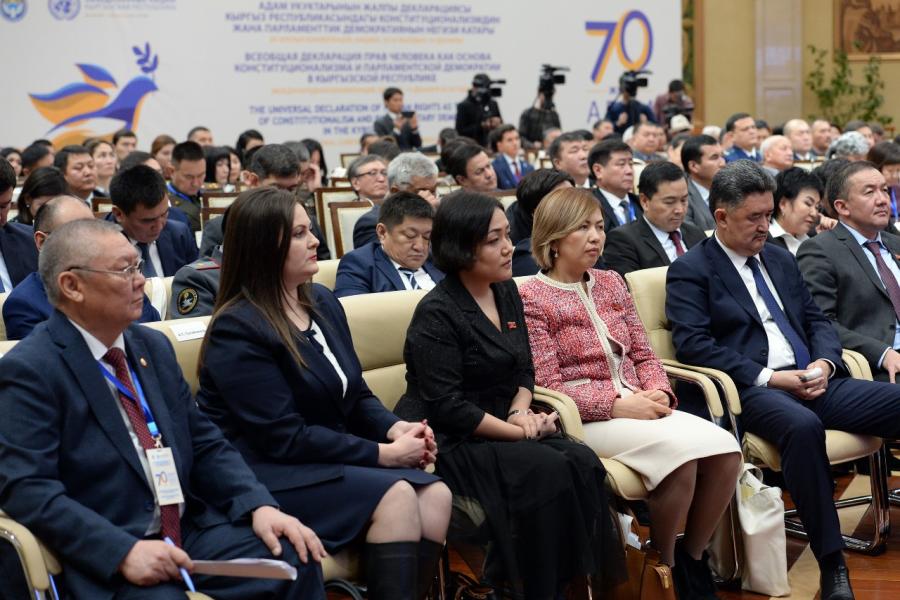 Photo | Press service of the President of the Kyrgyz Republic